Blog > From DeFi to DeSoc

From DeFi to DeSoc

On-chain social identity is a complex problem to solve because it involves the overlapping relationships between people, their associations, commitments, and membership to groups, as well as their beliefs. Although blockchains are capable of maintaining a ledger of all events, activities, associations, and memberships, it impossible to map them onto individuals to create an on-chain social identity without using some qualitative means of data. NFTs come close, but are transferrable so anyone can buy a favorable identity given that they have enough funds. Furthermore, Web3 is a highly financialized ecosystem owing to transferrable assets, in which NFTs signal wealth and status instead of provenance and trust. So how does one encode social identity, provenance, and trust on-chain? The answer is through SBTs (Soul Bound Tokens), DIDs (Decentralized Identifiers), and VCs (Verifiable Credentials).

We will explore these new concepts in the context of mapping social identities on-chain. We will look at Souls and Soul Bound Tokens, and how they can help enable a Decentralized Society (DeSoc) in Web3. We will also look at concepts like Self-Sovereign-Identity (SSI) through DIDs and VCs and how they help solve real-world problems like document tampering, Identity theft, social proof of identity, and privacy.

SBTs are non-fungible tokens that cannot be transferred or delinked from an individual's on-chain identity. DIDs and VCs serve as a collective infrastructure for creating digital identities and credentials, independently verifiable by individuals or organizations. SBTs, DIDs, and VCs all use blockchains to register engagements, associations, memberships, claims, and qualifications of individuals on a distributed ledger. However, the way they link these events to an individual is different. SBTs use souls to encode trust networks and relationships, while VCs use DIDs and hashing algorithms to verify a specific attribute, qualification, or individual claims.

The lack of dedicated infrastructure for mapping commitments, credentials, and social affiliations restrict Web3's bandwidth to build an inclusive and pluralistic social ecosystem based on authentic relationships of trust. The lack of on-chain social identities hinders crucial socio-economic activities like uncollateralized lending, personal brand building, and non-transferrable relationships to gauge the creditworthiness of individuals across social distance.

In May 2022, Vitalik Buterin (Co-founder of Ethereum) and E. Glen Weyl (Economist), along with Puja Ohlhaver (Lawyer) published the Whitepaper titled “Decentralized Society: Finding Web3’s Soul” proposing a solution to this problem. The whitepaper discussed concepts like Souls and Soul Bound Tokens and their ability to create a web of on-chain social identities, where the individual identities can act as leverage for credit-related services and the intersection of individual identities provides the basis for correlation-based discounting in quadratic funding or voting across democratic communities in Web3.

Souls are the fundamental primitive within this discussion. A Soul is simply an account or digital wallet that stores SBTs issued by other souls as proof of social affiliations. Now, it’s important to understand that a person can have multiple souls, each representing a different persona. A soul storing a series of SBTs representing multiple social interactions from discrete domains serves no utility, and there are two reasons for that:

Industry-specific souls should have industry-specific SBTs. A gaming soul has no use for corporate certificates and LORs for gaining access to gaming communities. It’s counterintuitive to share your entire social identity everywhere across Web3. For instance, to get into a gated PvP gaming championship, all you need to share is your gaming credentials and related SBTs.

SBTs populate souls. One soul issues them to another as proof of social interaction. An individual or an organization may issue an SBT depending on the nature of the interaction. For example, if an organization hosts a charity auction, the organizers will issue SBTs to each participant as proof of attendance. A podcast between two industry experts will end with SBTs being issued by one individual’s soul to another. The SBTs can be self-credited or attested by the counterparties involved in the social interaction.

In his blog post titled Soulbound, Vitalik relates the concept of Soul Bound Tokens from the popular video game World of Warcraft, which rewards players with ‘soulbound’ or individual tethered items that allow them to forge rare and legendary armor for their characters. Soulbound items are extremely difficult to obtain and cannot be transferred or sold in secondary markets, which makes them even more desirable. The only way to collect them is through a complicated quest or by killing a powerful beast along with 2 to 39 other players. 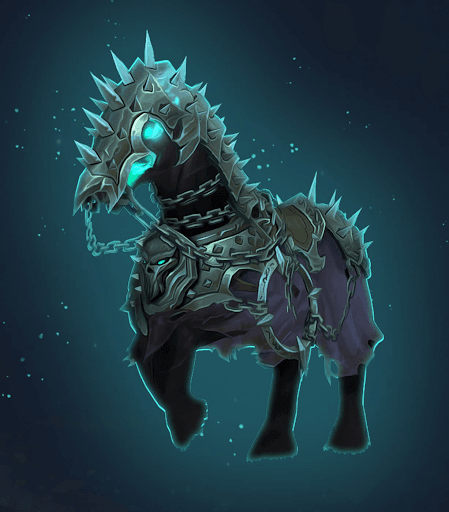 SBTs have only recently begun to gain prominence within Web3 (starting with the DeSoc whitepaper), but similar tokens already exist called POAP (Proof of Attendance Protocol) tokens. They represent physical or digital participation of the recipient in a social, or professional gathering. They may or may not have additional perks like access to exclusive events. Suppose a regular NFT is obtainable by doing a task ‘T’, then owning that NFT does not clarify whether you did ‘T’ yourself or you had someone do it for you. However, with soulbound POAPs the only way to acquire one would be via an event. Soulbound POAPs signal a social affiliation, as opposed to regular NFTs that are simply a reflection of purchasing power or status in the community.

Adidas gave its fans POAP tokens for attending a virtual event held on 17 Nov 2021. Recipients of the token were offered early access to an Adidas merchandise sale. However, as these tokens were not Soulbound, they could (and were) speculatively traded on the secondary market.

Here’s a screenshot of Vialik Buterin’s POAP collection he accumulated by attending Web3 and blockchain conferences over 7 years.

SBT Use Cases in Web3

Challenges with SBTs in Web3 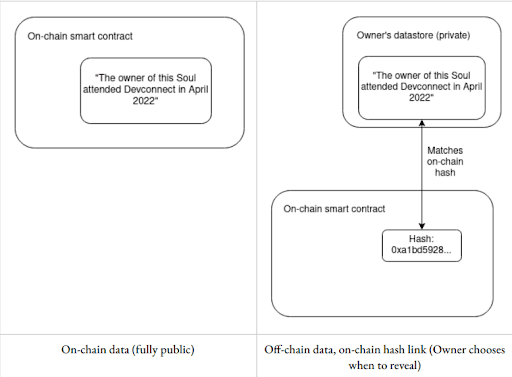 Decentralized Identifiers or DIDs are unique resource identifiers that allow entities to decouple themselves from centralized and federated institutions. They are enablers of a unique digital identification system that uses blockchain to create machine-readable, private, and cryptographically verifiable social documents of proof having the same benefits as physical documents in the real world.

Passports have unique IDs issued by the government that allows people to travel to other countries, driving licenses reaffirm your ability to safely handle a vehicle on public roads, and college degrees reaffirm your qualifications and employability in the physical world. However, centralized institutions issue these documents and thus the documents run the risk of being rendered invalid in case something happens to the institution. DIDs allow entities to generate their own unique identifiers, verifiable through cryptographic tools like digital signatures.

The basic structure of a DID is fairly simple. It consists of three parts:

DIDs are part of a greater digital infrastructure called the Verifiable Credentials ecosystem that governs its design specifications. The design goals for DIDs were listed as decentralization, control, privacy, security, discoverability, interoperability, portability, simplicity, and extensibility by W3C’s DID and VC data model. The initial infrastructure, core model, and specifications for the implementation of DIDs and VCs were co-developed by Microsoft Azure and W3C.

Verifiable Credentials are the interface layer in the digital social identity infrastructure. They are documents of proof for an identity, or a means to verify a specific ability, qualification, or claim. Verifiable credentials boast the same data and utility as their physical counterparts like passports, driver’s licenses, or a college degree but with enhanced safety and tamper-resistance thanks to technological aids like cryptography and a distributed ledger as a bedrock for social proof.

VCs can be issued by any individual or organization by linking it to a unique DID and adding cryptographic veracity to credentials. VCs can be stored in digital wallets and have an appearance similar to digital credit cards.

The issuer is the organization or individual that generates the unique DID and issues a digital document of proof. The holder is the entity to which the VC is issued and the verifier is the entity that uses the DID to verify the authenticity of the VC. DIDs can be used to identify the various entities in a VC ecosystem like the issuer, holder, or verifier, as they each have a unique DID. 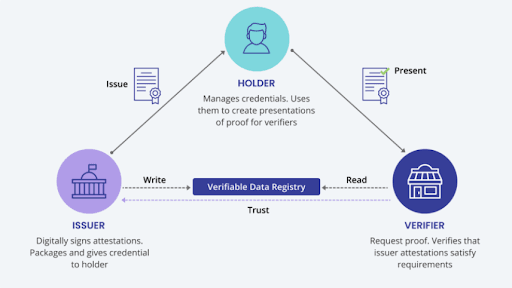 The first entity to incorporate a digital VC infrastructure was Keio University from Tokyo with 33,000 active students across Japan in May 2021. Keio University collaborated with Microsoft Azure to co-create a new infrastructure for managing class transcripts and graduation certificates for its active students and alumni base. With DID-based login and graduation certificates stored as VCs, it’s easier for both the students and the university to store, manage and issue documents.

At this point, it would be easy to see overlap between SBTs, DIDs, and VCs. Both these concepts work towards developing a specialized infrastructure to establish a qualitative on-chain social identity for individuals. SBTs and VCs both carry identity and proof of social affiliations in their respective domains. SBTs are unique and non-transferrable because they are tied to souls, while VCs derive their distinctive character from DIDs. In other words, souls replace DIDs in the case of SBTs. While SBTs are still a relatively new concept in the realm of Web3, VCs and DIDs have been thoroughly implemented in the Web2 sphere with seemingly fewer bottlenecks and a strong technological base to scale. As the infrastructure for on-chain identity strengthens across Web2 and Web3 bridging the gap between entities and proliferating synergies, both these concepts will become more interoperable and universalized for easier access.

Why we are talking about this?

Because as of now, Web3 is dependent on the same centralized infrastructure it was built to replace and transcend. Artists still rely on platforms like Instagram, Twitter, and Discord to build trust and initial provenance for projects. DAO governance relies heavily on Discord. Moreover, we have no way to map people and their causal relationships and leverage them to unlock basic financial services like uncollateralized lending and apartment lease agreements. All of this can be solved through Souls and SBT, and the successful implementation of VCs and DIDs empowering entities to build unique digital identifiers reaffirms our claim. Also, we want people to explore these new concepts in an attempt to boost awareness and streamline the adoption upon implementation.

If you resonate with anything we talked about in this extract and wish to carry this conversation forward, we are more than happy to get involved at hello@daolens.com. Moreover, if you are a Daoist, or a founder looking to empower your DAO with a specialized onboarding experience, you can reach out to us at vikram@daolens.com.