Let’s step back for a minute and look at why start-ups exist. They exist to solve a particular problem in a better way than what exists. Bonus points if they’re solving something that’s never been solved earlier. Now, these start-ups are able to try developing their products only when someone bets on their idea, aka, funds the company. Investors are willing to invest money into these start-ups thanks to the concept of an ‘exit’. If the idea has merit, and it’s successful, investors stand to make massive profits via ‘exits’ in the form of IPOs, acquisitions or mergers.

Imagine public projects being funded this way. Since public infrastructure projects like roads, highways and commuting setups are not exactly for-profit ventures, it’s tougher to get the money required to do them. But with a DAO dedicated to retroactive public goods funding, it’s possible. Public goods funding can be enhanced and accelerated with ‘exits’ too.

The Optimism team is building a mechanism to achieve this; with protocol generated revenue, retroactive public goods funding and a DAO called ‘the Results Oracle’. The basic premise on which the DAO works is quite similar to how start-ups work, it’s easier to agree on what worked than what will work. By introducing the concept of ‘exits’ to fund public goods, the Reward Oracle will fund projects retroactively, in tandem to the value they have already provided.

For example, imagine a township with a ring road around their town. This border road ensures easy connectivity from the city center to all edges and makes it super easy to commute within the town. Now, the ring road was an extensive project which took years to complete. The project was led by a small team of 12 engineers and they completely oversaw its design and development, with some help from the local administration.

Thanks to retroactive public goods funding, these engineers and the town administration can get paid retroactively for the value they provide to their town. In lieu of this ring road project’s success, the administration is also planning several other public infrastructure projects to improve commuting in town.

The payments are all very seamless, with the DAO’s project tokens regularly being regularly credited to their crypto wallets as per the terms laid out in their smart contracts. The ‘Results Oracle’ can also send rewards to any address, including individuals and organizations, smart contracts with fixed allocation tables or to project tokens can be distributed to several organizations and individuals. Like all things Web3, there’s great flexibility here too.

The other benefit here is that if anything went awry, the blockchain would make it obvious before any physical harm is caused. As such, even unpopular experiments can be tried out, as DAOs are generally opt-in and don’t force anything on anybody, like driving on a specific road.

How the Optimism model works

Based on the core idea that healthy public goods create a thriving and valuable ecosystem, the economics of this ecosystem re designed to generate value for three different stakeholders: 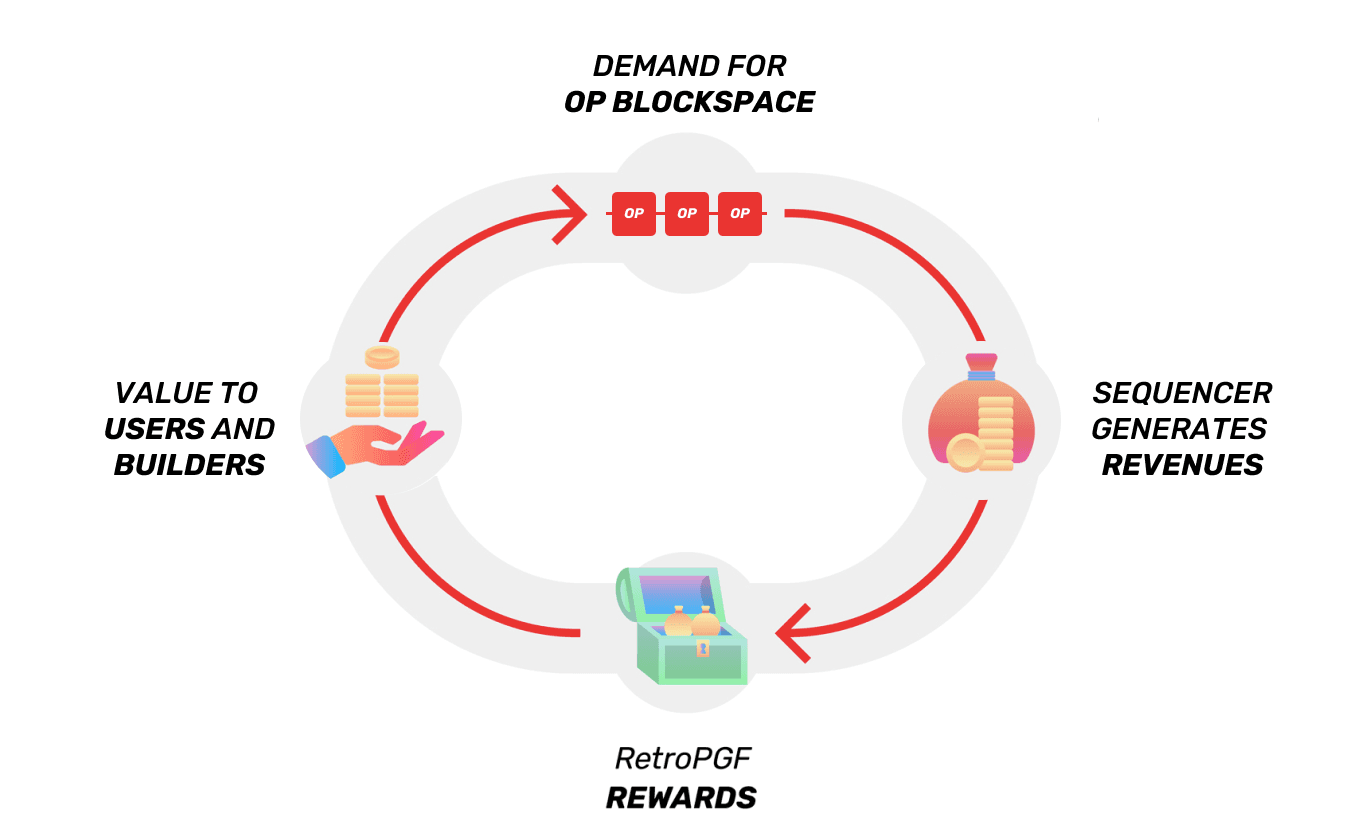 The focus with RPGF, like with any DAO based initiative, is to foster community and collaboration. The intent is to create a flywheel that catalyzes a network. With a digital or communal network, the cumulative value created can be leveraged to fund public goods, further increasing the revenue accrual mechanism, leading to even greater retroactive value rewards. The higher the rewards, the higher the incentive to create public good. This essentially leads to a sustainable loop of constant value creation. Imagine the scope of rapidly moving organizations like these in big cities around the world.

Regardless of the initiative, it’s important to establish mutually agreed upon KPIs to accurately measure value. For the ring road in a township example, the average monthly ridership during the first 3 years would make for a great KPI. If there’s a toll collection booth, keeping tabs on the average toll collection at different times of the year is another fantastic KPI. After analyzing these KPIs, similar KPIs can be set for similar projects; information which can be used for future RPGF projects.

If we were to look at a more digital example, number of users is perhaps the most commonly used KPI, and it can be a good indicator of several performance variables. With a software project in Optimism, the KPI could be the number of APIs called, or the number of NFTs traded. Point being, well-thought out measurement is key, but you also have the flexibility to set up things however you want.

A benefit here is that RPGF reduces the reliance on judging ahead by reprioritizing the focus on people to judge backwards. . The democratic and quick nature of the blockchain allows for rapid experimentation at a massive scale. Since there is no central authority controlling how things work, the permissionless nature empowers experimentation, which subsequently sparks development and innovation.

Permissions are also why things that may be a day’s work and a start-up may take a month or more at a large corporation. A permissionless setup empowers bottom up building, providing a critical advantage to existing public goods development systems. Before Web3 and RPGF, this was a luxury enjoyed only by lean start-ups. Thanks to the transparent and rapid nature of the blockchain, any entity that runs on it can enjoy this benefit.

Other Benefits and the Future

The Results Oracle can also help with rapid expansion of organizations, quickly testing out new ideas and judging their merit based on retroactive value. This information can be used to prioritize expansion or redevelopment objectives and cut down significant time and cost. RPGF is well poised to create an environment of rapid experimentation, previously only enjoyed by startups in the realm of public goods.

Bringing start-up like experimentation to the realm of public goods is further a concept that could completely change our world. Imagine cities being developed with RPGF, or your housing community using RPGF for new developments. The sheer scope for experimentation will completely transform how we do things for the better. Not to mention the world around us.

Perhaps the biggest benefit is how it incentivizes the creation and development of public good projects. Everyone’s got bills to pay and while people may be interested in creating all sorts of things, circumstances and the lack of scope for a clear payoff majorly hold them back. While circumstances can be avoidable, RPGF solves the critical payoff problem that all public good project builders face. Now, there is scope for a real payoff, and maybe even consistent income.

Of course, developing public goods is never the same as creating nice to have products that most start-ups out there are making. These projects often form the lifelines of a city and impact the daily lives of residents and visitors. But that doesn’t mean experimentation should take a back seat. Public goods is one area where innovation and progress is slow. DAOs have a massive opportunity to accelerate this, and they already are.